The strategically located thoroughfare continues to draw investors.  However, while it boasts flourishing townships and soaring values on one side, properties on the other side of the road tell a different story......

Old had in recent years seen new developments spring up – amid its sprawling housing estates, there is a haphazard mix of factories, office buildings, nurseries and automobile yards.

The developers behind the new projects were attracted by the strategic location, high plot ratio of 1:6 for developments on commercial land (according to Draft Kuala Lumpur City Plan 2020), redevelopment potential and pent-up demand from the locals for newer projects.

The century-old trunk road – so named because it was the only road between (KL) and Port Klang – is also linked to the New Pantai Expressway (NPE) and the expressway between (KL) and Shah Alam.  Despite road-widening works that cost RM359 million, its infamous traffic snarls seem to get worse every year.  Perhaps it is so not only because of the sheer size of its population, but also the fact that it is a toll-free alternative to town.

“I tell you, is too-free, 10 (min) to Mid Valley, 15 (min) to (KL) and (PJ), and is connected to the Maju Expressway (MEX), which goes all the way to the city centre and (KLIA).  There are also many wet markets such as the famous in Kuchai Lama.  There is a lot of good food and it’s a friendly neighbourhood.  I know because I stay here.  What more can you ask for?” says iProp Realty Sdn Bhd managing director Victor Lim.

In recent years, condominiums and serviced apartments have sprung up along the road and further inside the townships, especially the Kuchai Lama area.  This is partly due to the availability of land and older low-rise properties with redevelopment potential and small acreage, coupled with high density allowed.  A notable exception to this is mixed-use development 9 Seputeh by Gapurna Group, which covers 17.3 acres and has a (GDV) of RM2.5 billion.  It will comprise nine residential and commercial blocks.  A dedicated link bridge will connect the project to the NPE and .  A Pedestrian bridge to the monorail extension, which is purportedly coming up, has also been proposed on the side of the project.

“ has seen a number of developments since 2010 and the newer developments show that the area has become more upscale.  Prices of condos and apartments, which were hovering around RM300 to RM400 psf range in 2010, have now moved up to RM500 to RM700 psf, with one project even touching the RM1,000 psf mark,” Henry Butcher Malaysia Sdn Bhd director Tang Chee Meng tells City & Country.

Meanwhile, the 3.4-acre in OUG will be redeveloped by Singaporean developer Far East Organization.  However, no details are available yet.

Over in Jalan Sepadu, the Pearl Suria serviced apartments are being redeveloped into a retail complex with 403 serviced apartments, with built-ups of 763 to 1,213 sf.  The project will be connected via a bridge to the Pearl International Hotel and Pearl Point Shopping Mall across the road.

The wrong side of the road?
However, some newer developments have not been as well received despite the area’s potential.  Two such examples are Verve Suites KL South and The Scott Garden KL.  Both projects have a number of things in common – they are practically neighbours on the same side of and they pioneered new concepts in the area.

Verve Suite KL South was formerly an office building.  The building was acquired and is being extensively refurbished by Al Batha Bukit Kiara Holdings Sdn Bhd (better know as Bukit Kiara Properties), which also built the unique Verve Suites condominiums in ’ Kiara.  Verve Suite KL South comprises two towers that will house 321 serviced suites, 45 small office / home office () units and three retail units.  The serviced apartments have built-ups of 555 to 876 sf and will be fully furnished.  Prices start from RM600,000 for one-bedroom units while two-bedroom units will be priced at RM750,000 onwards.

Verve Suite KL South has sold 50% of Tower A since it was previewed to its existing clientele people who registered their interest in the project in the middle of last year.

The Scott Garden KL is a mixed-use development comprising a 3-storey retail podium housing 100 lots and three blocks of SoHos.  The launch prices of the retail units were between RM500,000 and RM600,000, which is fairly pricey, says Landserve’s Chen.

When Scott Garden was introduced, the market hailed it as the new face of .  Chen says it was intended as the area’s anser to Sunway Giza in Kota Damansara, but it did not achieve that level of vibrancy.  Today, Scott Garden is known as an after-work destination, with several pubs and restaurants on the ground floor.  A Tesco hypermarket occupies one of the basements.

In contrast, on the top floors are many empty cob-webbed units, including “prime” units that face .  The SoHos, however, have a healthier take-up and occupancy rate.  All of the units have been sold since they were launched in 2011.  The building manager did not respond to enquiries on the building’s occupancy rate.

So despite their unique selling propositions, what went wrong with these projects?

It’s a classic case of location, location, location.  Verve Suite KL South and Scott Garden are literally on the wrong side of , consultants opine.
“They sit on the commercial part of , sharing the space with haphazardly-built factories and car showrooms.  Furthermore, there aren’t as many amenities, and few roads lead out to Bandar Sunway, KL and other areas,” says Chen.

iProp’s Lim elucidates on Verve Suite KL South’s “awkward” location: “Not only does it face a T-junction, those coming from KL need to go quite far to make a U-turn to access it.”

The individual projects have their challenges to overcome.  In the case of Verve Suite KL South, the property has a chequered past.  Formerly an office building, it failed to take off as was not a preferred corporate address, says Chen.  The building was eventually rented out to a local college as a hostel.

The building’s past casts a shadow over Verve Suite KL South among folk.  Lim says there is a perception there is a disconnect between the development’s price and the building’s age.  “Being such as old building, the property does give the feeling that it’s not worth that much (over RM1,000 psf).”

Chen says Verve Suite KL South needs a radical physical transformation to shake off its past identity.  “It needs a wow factor!  That way, people will see it as a modern serviced apartment project, and not a failed office building.”

However, Lim is more optimistic about the project’s outlook.  “I Think BKP, being famous for delivering quality products, will live up to its standards and expectations.  The images in its showroom show that it is a total revamp of the building.  It even added a sky bridge, which is something you have not seen in before.”

The double-volume Vercadiscos sky bridge will join the two blocks at levels 14 & 15.  Inspired by the ancient Arkadiko arch bridge in that linked the cities of and Epidauros, the sky bridge will have facilites such as a theatrette, a sky gym, chill-out areas, and a kitchen and dining area for private functions.
“We have closed our on-site showroom since November to facilitate demolition works and the refurbishment of the common facilities.  Now, we are building a gallery on the sky bridge to prepare for the official launch,” says BKP group managing director Datuk N K Tong.

Meanwhile, Scott Garden is riddled with problems – some by default, some by design.  For starters, it is sandwiched between a flyover and a row of old, low-rise shops.  The entrance of the building is also easy to miss with the nearest U-turn several kilometres down the road.

While Lim agrees that Scott Garden was initially very quiet, with some tenants moving out early on, he says it is well known as an entertainment hub now, drawing crowds from as far as Klang.

The “right” side of the road
What’s happening on the residential side of the road?  Over at the freehold Taman Desa, values shot up after the neighbourhood was turned into a guarded scheme, says Chen.

“Prices of homes here used to be on a par with those in Bangsar.  Even then, 2-storey houses were priced at RM70,000.  However, Bangsar blossomed after opened.”

Condo values have risen as well.  Over at in Kuchai Lama, several condominiums have come up in recent years.  Chen observes that the units are selling at RM500 psf, which is on a par that of older condos in ’ Kiara. 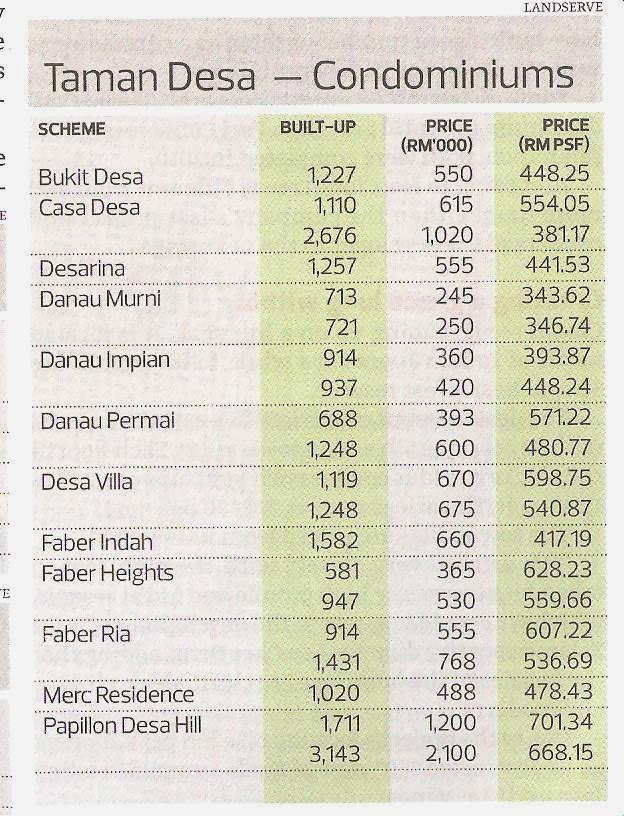 Lim notes that prices have almost doubled in the past two years.  “In 2010, condos were selling at roughly RM250 to RM400 psf.  Nowadays, it is easily RM500 to RM800 psf.  Population and wealth growth are the main reasons.  The mean age group for is now around 29 to 30, plus most of them are earning good income, therefore they can afford to invest in properties.  Easy access to housing loans also contributed to the price increase.”

The opening of drove up the prices of properties in Kuchai Lama.  The 24/7 hypermarket, which occupies the basement of , is a popular spot among folk.  It draws even expatriates living in the posh Seputeh enclaves.
“There is more variety, and the goods are fresher and cheaper,” says Landserve senior negotiator K C Chew, who not only specialises in the market but also lives there. 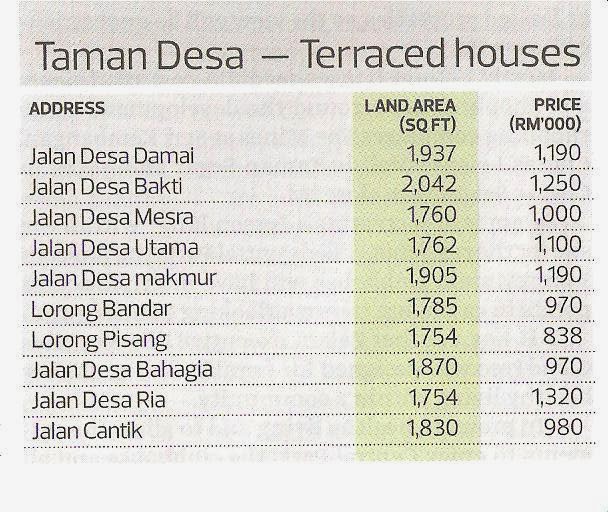 Outlook
While several high-rise housing projects were launched recently, consultants generally feel that there is no oversupply looming on the horizon.

“I would say the supply issue is not as bad as in ’ Kiara.  As long as the pricing is reasonable, many would still prefer to invest in Old Klang Road, partly due to its proximity to KL and PJ and also because most of the roads here are toll-free,” Lim says with a chuckle.

“9 Seputeh is massive.  I was told that the condos have been fully sold due to the developer interest bearing scheme (DIBS).  In front of 9 Seputeh is a proposed (MRT) station.  Should this materialise, the properties near it will boom!”

“ is a very convenient location.  It caters for people who work in KL and PJ.  Investors should look at investing in projects with easy access to alternative roads out of the area as can be pretty congested during peak hours.  Another point to consider is the pricing of the project.  If the project is priced substantially above the prices of similar developments in the neighbourhood, it has to contain value-added elements which are not found elsewhere and that can justify the premiums paid.  Lastly, as always, buy from a developer with an established track record and who is financially strong so that the risk of the project being abandoned is low,” says Tang. E